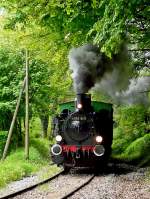 . The steam engine "Anna N° 9" is running on the heritage railway track of "Train 1900" between Pétange and Fuusbësch on May 3rd, 2009. 
De Rond Hans und Jeanny 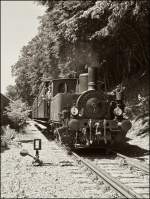 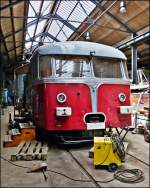 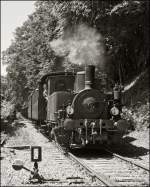 . Locomotive without boiler N° V 12 with 3 axles, belonging to ARBED Dudelange. Built in 1956 by Jung-Kirchen Jungenthal/Sieg under the number 12513. Type designation by the manufacturer: "Felix". Power 250 hp, weight 39t. Fond de Gras, September 13th, 2009. The advantage of this type of locomotive it is very simple and robust, the most complicated of a normal locomotive (with boiler) is the boiler. It was so cheap to acquire and in maintenance. His conduct is easy and does not require highly skilled personnel. The exhaust of the locomotive is composed of only water vapor, gas combustion and smoke. It can therefore operate safely in areas covered and within the halls of manufacture. The disadvantage is of course to have a limited range and require a distribution network Steam. The latter was not available for all kinds of applications in the steel mills. 
De Rond Hans und Jeanny

. Locomotive without boiler N° 123 with 2 axles, belonging to ARBED Differdange (formerly Hadir). Built in 1928 by "Meuse-Liège" under the number 3332. Power 285 hp, Weight: 38t. Fond de Gras, September 13th, 2009. The operating principle of the latter is a cylindrical tank mounted on a frame of steam locomotive and filled to about half of water is crossed by a stream of steam, about 10 bar pressure delivered by installation of steam fixed. At the end of this procedure of filling, the water in the tank of the locomotive took the temperature corresponding to the pressure of the steam introduced (ca. 200 ° C). The engine is disconnected from the filling station and can provide a traction advantage of heat energy in water embedded. As the locomotive rolls, water temperature and jointly vapor pressure led to the cylinder decreases. When a pressure of about 2 bar is reached, the locomotive must regain filling station and the cycle begins again. 
De Rond Hans und Jeanny

A RB to Athus (Belgium) is arriving at the stop Lamadelaine on October 1st, 2011. 
De Rond Hans und Jeanny

The CFL 3016 is hauling the diverted IC 90 "Vauban" through the station of Rodange on October 1st, 2011. 
De Rond Hans und Jeanny 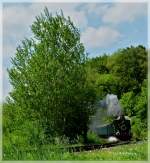 The first steamtrain of the season 2011 is running between Pétange and Fuussbësch on the track of the heritage railway Train 1900 on May 1st, 2011. 
De Rond Hans und Jeanny

The historical Uerdinger railcar 551.669 is running on the track of the heritage railway "Train 1900" between Pétange and Fond de Gras on May 1st, 2010. 
De Rond Hans und Jeanny

4003 arrives at the stop Lamadelaine on its way from Luxembourg City to Athus (B) on August 4th, 2009. 
De Rond Hans und Jeanny